To the surprise of, well, no one, Troy's annual Victorian Stroll, set for December 6, will be a virtual event, spread out over two weeks (December 6-20), to minimalize the threat of coronavirus, with recent surges in infections across the country in recent days. This will eliminate congestion at certain city businesses, such as Market Block Books, that see boosts in business on what would be the last major event in the city for the year.
=============================
DC Comics will pause their regular monthlies at the start of 2021 for a 2 month event that offers a peek into a prospective future.
Future State will see some new characters emerge, taking over iconic characters. For example, in the Superman line of books, the Man of Steel's son, Jonathan, will become Superman (currently is one of two Superboys). It is speculated that Luke Fox, who had been Batwing in the books, will become Batman. Aquaman and wife Mera's daughter will grow up to be Aquawoman, with Aqualad II, the son of the Sea King's nemesis, Black Manta, taking over the Aquaman handle.
The piece de resistance comes with Wonder Woman, whose Greek heritage is being swapped out for some Latina flava. 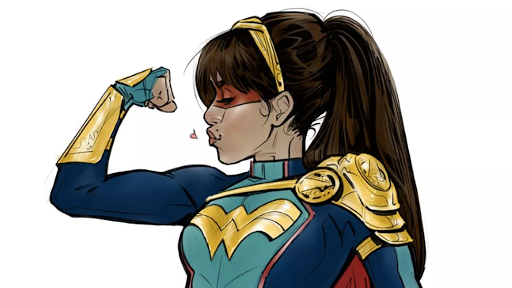 Image courtesy DC.
DC, seeing as how the Hispanic market remains underserved, is hitting the ground running with Yara Flor, the new Wonder Woman, such that they've already set plans in motion for a CW series produced by---who else?---Greg Berlanti and his staff, and that a Wonder Girl book will hit stores after Future State to set the stage to follow her career path. Sales, of course, will decide if it's a long term plan. DC has seen how Marvel has used cultural diversity to great effect and success in recent years (i.e. a Muslim Ms. Marvel, a mixed-race Spider-Man), and now they're trying to catch up. Let's hope it works.
The downside, however, is the price scale. If you want the core Bat-books over this two month period, it'll cost you a whopping $8 per issue because of extra pages. I believe Wonder Woman will run around the $6 level for the same reason. The advice from ye scribe is to wait for trade paperbacks.
===============================
Lots of speculation as to whom Sony will choose to succeed the late Alex Trebek as host of Jeopardy! in 2021. Actor LeVar Burton (ex-Reading Rainbow, Star Trek: The Next Generation) is a popular choice among fans, and it would add to the growing list of African-Americans being given iconic game show gigs (i.e. Steve Harvey on Family Feud). One of the series' greatest champions, Ken Jennings, already attached to Sony's reboot of The Chase for ABC, is also a candidate, and became a consultant to Jeopardy! recently.
All we can say is, stay tuned.
Posted by hobbyfan at 8:25 AM