On The Shelf: The movies ain't out yet, but we'll put the tie-ins out anyway

With "Wonder Woman '84" & "Black Widow" both delayed due to coronavirus issues in theatres, DC & Marvel forged ahead with 1-shot specials for each of the heroines.
Wonder Woman '84: Museum Mayhem marks the return of Louise Simonson to DC as co-writer. 80's vet Bret Blevins (haven't seen that name in way too long) draws the lead story in a more cartoony style than we're accustomed to.
The plot: Diana is playing tour guide for a school field trip when things go awry. Barbara Minerva, the soon-to-be Cheetah here, makes a brief appearance. This is meant to be a prologue for the movie, but it comes across as lacking. The unadvertised back-up by Margaurites Bennett & Sauvage (ex-Bombshells) offers up a self-serving scuzz who steals Wonder Woman's magic lasso, but if this moron thinks it'll work for him, well, he is missing a few brain cells.
Rating: C. The movie will be infinitely better.
================================
Meanwhile, Marvel spent October issuing a series of True Believers reprints of some "classic" Black Widow adventures, but made sure to get an all-new one-shot in the marketplace, too.
Veteran writer Ralph Macchio (no, not the original "Karate Kid") authors "Widow's Sting", in which the Widow, in her traditional blue jumpsuit, infiltrates a meeting of the Maggia, and runs afoul of two of Spider-Man's old enemies, Silvermane, and his bodyguard, Man Mountain Marko, who have come into possession of an ancient artifact stolen from Dr. Strange (who doesn't appear, and neither does Spidey). Mobsters & magic don't mix, but an old buzzard like Silvermane wouldn't understand, as all he wants is power, and as much of that as possible. 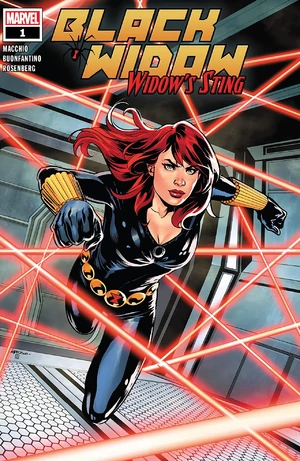 This is so old school, Macchio writes this like this was back in the 80's, too. Which was the last time he was a major playa as a writer.
Rating: A.
==============================
Halloween was two weeks ago, but there's always a good time to enjoy some Swamp Thing.
However, DC's Legend of The Swamp Thing Halloween Spectacular posits the "Guardian of The Green" as yet another immortal, "tiimeless" character. They're trying to suggest there was a Swamp Thing in ancient Rome, during the time of Julius Caesar?!?! Bad idea.
Berni Wrightson & Len Wein created the character nearly 50 years ago. Alan Moore refined it more than a decade later, and I am not sure if any of them foresaw Swamp Thing as an immortal. Well, Moore, maybe. You're better off watching the reruns of last year's DC Universe series on CW.
Rating: C.
==============================
With Batman: The Adventures Continue expanded to 8 issues (finishing in January), DC continues to reach into the vaults, and produces a trade paperback formatted for the young ladies.
Batman Adventures: Batgirl: In a League of Her Own collects 5 stories from The Batman Adventures and its follow-up series, Batman: Gotham Adventures, mostly from the latter book, plus a preview of the new novel, Shadow of The Batgirl, which would be a good Christmas gift for your little lady. And so is this trade paperback, produced in the same size as the graphic novel. You get doses of Harley Quinn and her bestie, Poison Ivy, very early in their relationship.
All in all, a fun re-read.
Rating: A.
==============================
And speaking of Batgirl, the finale to her current series gives DC an avenue to introduce readers to the new Batwoman, Ryan Wilder, who makes her first comics appearance, before adopting the mantle of Batwoman, for a few pages. Seems editorial was pressured into inserting Ryan somewhere, rather than introduce her with a stand-alone 1-off, which would've been a better choice.
Batwoman will begin season 2 in January, and we're hearing they've come up with a novel way to write off Kate Kane (Ruby Rose) for the duration, perhaps holding out hope that Rose will return, or another actress can be shoehorned to take her place if they realize Ryan's not working.
January-February sees a 2 month event from DC, Future State, which is set in a future timeline that has the DCU under siege from something called the Magistrate. However, as usual, they're expecting you to max out your credit cards and buy as many of these books as possible. Prices range from $4 (i.e. Aquaman, Teen Titans) to $6 (Superman and related books) and $8 (Batman & related titles). Wait for the trade paperbacks.
I don't like the price scale, and I don't like the concept. Your actual mileage may vary. Due to this event, the regular titles are on vacation until March.
==============================
I'm part-Native American on my late father's side of the family, dating back three generations, I think.
It's for this reason that I decided to take a look at Marvel's radical rethink of Werewolf by Night, whose lead lives on a Native American reservation in the Southwest with his grandmother and girlfriend, the only ones he trusts, and they're definitely steering him toward herodom.
There's also a new, 21st century Red Wolf, the Native American hero introduced, like the original Werewolf by Night, Jack Russell, in the 70's. This Red Wolf doesn't wear a costume, and it seems Red Wolf's his actual name this time. Seems Marvel's run out of story ideas for Jack, and has decided to reboot for a new generation. I can dig.
Rating: A.
Posted by hobbyfan at 10:51 AM

That's assuming it actually gets there. Regal, one of the largest theatre chains, just re-closed its upstate NY locations. I'd not be surprised if it gets pushed back again.