Recent reports this morning have Joe Biden overtaking President Trump in Pennsylvania and Georgia, and also leading in Nevada. Yahoo! has Biden leading by 50 electoral votes at last count, contrary to networks' tabulations having Biden with 8 fewer electoral votes. Should Biden be called the winner in Pennsylvania, with its 20 electoral votes, then, it's over.
However, for a second straight night, Trumpian sheep descended on battleground states either trying to stop the count (Pennsylvania) or continue it (Arizona). These people do not comprehend the fact that the individual states, insofar as counting votes are concerned, are not beholden to America's Oldest Baby, whose non-stop lying the last three nights has exposed him once and for all as a fraud, a 70-something man-child who cannot discern the concept of defeat. In short: 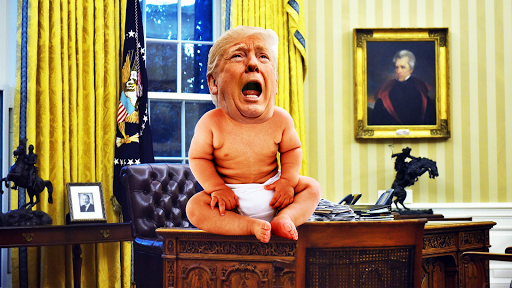 "WAAAAAAHHHHHHH!!!"
Twitter has been working overtime to suspend accounts belonging to Trump allies such as Steve Bannon, or blocking tweets from Trump himself because the content of these tweets intends to mislead users. Even Fox News has finally grown tired of the president and his sycophants being detached from reality. Anchors Bret Baier and Martha McCallum took the Duchess of Dumb, Kayleigh McEnany, to task for continuing to tout Trump's delusional rants.
I'm already mapping out a future for the president and company. To wit:
Dumb Donald II & Stupid E: If they ever make a live-action Beavis & Butt-Head movie, with Mike Judge's animated airheads all grown up, the Trump brothers would be perfect.
Kayleigh: She'll land, not at Fox News, but at up and comers One America or Newsmax, the latter of which hired Sean Spicer when it launched. It could be worse. She could wind up on The Masked Singer next season.
Melania: If she's smart, she'll pack her bags---and Barron---, file for divorce, then enter the Witness Protection Program.
Rudy Giuliani, currently in the new "Borat" movie: Bellevue.
Dumb Donald I: Leavenworth or Bellevue.
Spam Hannity, Tabloid Carlson, and the rest of the Fox sycophants, unfortunately, are safe for now. Spam's also polluting the radio airwaves in the afternoons. However, if Rupert Murdoch decides to sell Fox News to Disney, to divest himself of this disaster, color them gone.
Of course, I could be wrong.
Posted by hobbyfan at 11:24 AM

We're all tired of you Donald. Your act has become stale and tired. Just go home.

Harry Truman famously said, if you can't stand the heat, get out of the kitchen. Trump does that when he is faced with questions he can't answer without further embarrassing himself.