The "Patriot Way" isn't working in Detroit any more than it has of late in Houston.
Matt Patricia, in his 3rd season as head coach of the Lions, and GM Bob Quinn were fired earlier today, 48 hours after the Lions were blown out by the Texans, 41-25, on Thanksgiving Day. The former New England defensive coordinator and RPI graduate led the Lions to a 4-7 ledger this season after the Thursday loss. Overall, Patricia was 13-30 in 2 1/2-plus seasons. Next stop? Maybe a return to New England?
=====================================
Pittsburgh & Baltimore will have to wait until Tuesday to play.
That decision was made Friday as more positive tests for COVID-19 were made public in Baltimore, and while Steelers players weren't happy with losing a rare opportunity to play at home on Thanksgiving, Ravens QB Lamar Jackson was among the Baltimore players who tested positive. Robert Griffin III, the former Rookie of The Year, will start Tuesday night. Had they been able to play tomorrow, the game would still have aired on NBC, but now, it hasn't been decided if NBC will keep the game.
======================================
For the 2nd straight week, Florida State had a game cancelled due to COVID-19. Last week's 11th hour cancellation of their game with Clemson left some ill feelings with Tigers coach Dabo Swinney. Today, the Seminoles were to play Virginia. We have not yet heard any reactions from Cavaliers coaches.
At least college basketball teams are playing in bubbles, like their NBA brethren.
=======================================
For just the 4th time in 20 years, a woman suited up for a college football game.
Vanderbilt senior Sarah Fuller was brought onto the Commodores' roster after they lost their kickers to coronavirus concerns. Fuller made her debut earlier today, and that was the good news. The bad? Vanderbilt, having a horrible season, were blown out, 41-0.
Fuller stepped on the field for the 2nd half kickoff. 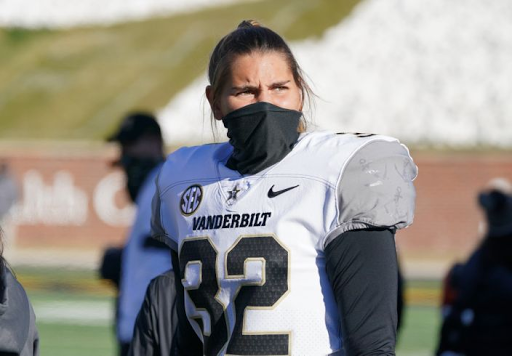 Progress for women in college football comes slowly. Bear in mind, too, that soccer star Carli Lloyd had tried out with the NFL's Philadelphia Eagles several months back, and could still land on an NFL roster someday. Maybe Fuller, who had finished her soccer season, could, too.