One wonders if the blue grass of Kentucky comes with some paint chips.

How else to explain how Senator Rand Paul had his YouTube account suspended for a week for---what else??---spreading misinformation about COVID-19 vaccines and masks. In other words, Paul was tagged for the same violation that has landed Empty-G (Marjorie Taylor Greene) in hot water with Twitter for the fourth time. Of course, Senator Peabrain will tell you he's a doctor and he's qualified. Nope. He's a doctor alright----an eye doctor!!

I wonder if he's treated Mr. Magoo before going to Washington?
=============================================
It shouldn't surprise anyone that internet "sleuths" with nothing better to do dug up some old dirt on Jeopardy! showrunner and incoming host Mike Richards (ex-The Pyramid), dating back to his time as a producer on The Price is Right before being hired by Sony.
Just the same, Sony decided to hedge its bets by adding a 2nd MC, one specifically assigned to special episodes produced for ABC.
That would be actress-author-neuroscientist Dr. Mayim Bialik (Call Me Kat, ex-The Big Bang Theory, Blossom), who was named as the 2nd host on Tuesday. 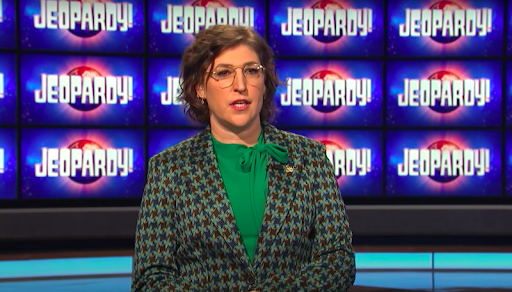 Photo courtesy of Sony Pictures Television via Yahoo!.
Jeopardy! begins season 38 of its current run next month. There will be a pool on how long it takes before Sony is pressured to send Richards packing. Hosting The Pyramid for Sony-owned GSN a few years back wasn't exactly a world-beater.
==========================================
The CW's live-action reboot of the iconic 90's cartoon, The Powerpuff Girls, has just hit another roadblock with news breaking earlier that actress Chloe Bennett (ex-Marvel's Agents of SHIELD), has decided not to move forward with the project due to "scheduling conflicts".
If I were to venture a guess, I'd say those "scheduling conflicts" may have something to do with the Marvel Cinematic Universe, and the prospect of Daisy "Quake" Johnson, Bennett's character from SHIELD, being called back to duty for a movie. Stay tuned.
===========================================
All Elite Wrestling will carry on without wrestler-rapper Max Caster, 1/2 of the tag team The Acclaimed, dropping freestyle raps for a bit.
Seems Caster got in hot water over a rap performed on the August 3 episode of AEW Dark in which he referenced Olympic gymnastics star Simone Biles' well publicized psych issues during the Olympics. AEW has stressed that Caster is not suspended, as of press time. Caster, to this point, has been posited, with the rap gimmick, as AEW's answer to John Cena's old "Dr. of Thuganomics" persona from 2002-5 in WWE, but to my knowledge, Cena never crossed the line the way Caster supposedly did.
Time will tell if Caster will follow Cena's career trajectory.
Posted by hobbyfan at 4:13 PM