One of their off-season acquisitions, Vinny Curry, is out for the season due to a blood disorder that led to the removal of his spleen. Curry, who played for Philadelphia and Tampa Bay previously, was signed to a 1 year deal, but won't see the field for the Jests, who lost Carl Lawson for the season a week ago. 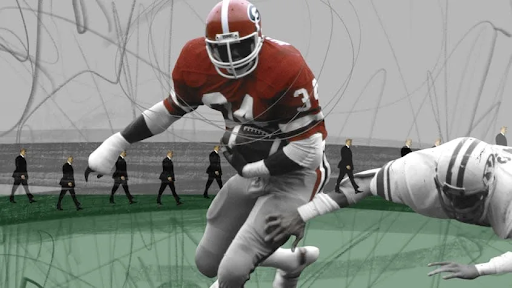 File photo courtesy of AP Images/Getty Images/Yahoo!.
Walker, who makes his home in Texas, is making a bid to become a US Senator from Georgia, and is relocating to the Peach State to make a run at Raphael Warnock, the preacher who unseated Kelly Loeffler back in January. Walker already has the endorsement of his former boss with the Generals, Citizen Pampers himself, Donald Trump, but should be aware that 9 out 10 Trumpdorsements usually end in failure.
Beware of divine intervention, Herschel.
=======================================
It wasn't so long ago that there was a schism between ESPN reporters Maria Taylor, who has since left the network, and Rachel Nichols, a veteran reporter who was bumped from covering the NBA Finals in 2020 to make room for Taylor, who'd otherwise been a sideline reporter for college football & basketball. Nichols, in a leaked interview, alleged that Taylor was given the NBA gig because she's an African-American.
A year later, Nichols has followed Taylor out the door.
ESPN announced earlier this week, after bumping Max Kellerman from First Take to appease the ego of Screamin' A. Cosell (Stephen A. Smith), and giving Kellerman a separate gig, Nichols is being pink-slipped, and her NBA-centric series, The Jump, is being cancelled. Watch. Nichols will land at FS1 in due course.
Kellerman, by the way, fills a void in joining ESPN Radio's morning show, and will keep his ESPN2 series, Max on Boxing, while adding a solo series on ESPN. The decision to bounce him from First Take is not so much fixing something that isn't broken, but, as I suggested above, to make Stephen A. feel better, since he gets taken to school on a daily basis.
Worse, Smith was flown to Los Angeles to fill in for Jimmy Kimmel on the latter's ABC yack-fest Monday, as Kimmel is on Summer vacation. Someone check the ratings, which must've gone in the toilet. Smith flopped with his own primetime yackker a few years ago, in which he came off as an Arsenio Hall rip-off, so what made Disney suits think he'd be a fit in late night?
======================================
So the Mets are in another slump, and have already blown their season series vs. the top two teams in the NL West, San Francisco & Los Angeles. Unsurprisingly, the fair weather fans online are calling for Luis Rojas' head. There's no satisfying these whiny dweebs, and I'd not be surprised if these jabronies are also calling WFAN and other talk outlets to whine. To these so-called fans, I say, seek therapy, or, otherwise, STFU!
Posted by hobbyfan at 11:22 AM