On The Shelf: DC does the unthinkable with an iconic character (at least one of them)

Many years ago, Dr. Frederic Wertham, in his infamous book, Seduction of The Innocent, made the postulation that Batman & Robin (Bruce Wayne & Dick Grayson) were secretly in a gay relationship that couldn't be fully explored in stories in those days. Keep in mind, too, that was way before NAMBLA was a thing.

But Wertham's claims were later debunked, and it goes a long way in explaining why Batman in particular has had a fair number of girlfriends, including, of course, Catwoman, since then. Once Dick came of age, he, too, would have a string of romantic interests. Today, as Nightwing, Dick's heart is split between Barbara Gordon (Batgirl) and Princess Koriand'r (Starfire), the alien hottie introduced in Marv Wolfman & George Perez's New Teen Titans stories 41 years ago.

Jason Todd, who now uses the Red Hood handle, is, in a way, DC's answer to Marvel's Winter Soldier (Bucky), but one would guess that in the 2011 series, Red Hood & The Outlaws, Koriand'r got busy with him, too. Otherwise, he's a full-on bachelor. The current Robin, Damian Wayne, was thought to be headed in the same direction as Jason, but in his current series, they're at least teasing his first romance.

That leaves us with Tim Drake, who was introduced in the late 80's, and DC was SO high on him that when it was time for a Robin solo book, Tim starred in three miniseries before the ongoing title, which itself lasted well over 100 issues. During that time, Tim also had a couple of love interests, including Stephanie Brown, aka Spoiler (and today is one of the Batgirls), his on-again-off-again sweetheart.

Which brings us to now, and DC's latest attempt at garnering mainstream attention to boost sales.

In the current Batman: Urban Legends book, Tim broke up with Stephanie, just months after the two were reunited in the pages of Young Justice. In the current issue, out now, an editorial decision (we think) has turned Tim into a bi-sexual. 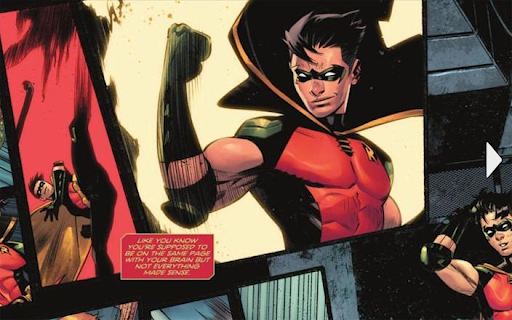 Tim reconnects with an old classmate, and, as I'm sure you've heard already, they are at least teasing his former classmate, Bernard, as his new partner.

This decision isn't so much about adding another established character to the growing list of LGBTQA+ heroes, or DC's glaring inability or unwillingness to create an original LGBTQA+ hero, having only developed two of them from scratch in the last 34 years, but, rather, getting headlines for converting an iconic brand like Robin. Marvel's done it, too, multiple times, and for the same reason. It's all about that dolla-dolla-bill, y'all.

The real question, of course, is, will it stick? That will depend on whether or not this is accepted as canon going forward. Something tells me this story ain't over. By a longshot.