In the hands of James Gunn, "The Suicide Squad" has more action, splatter, and drama than its predecessor did five years ago. 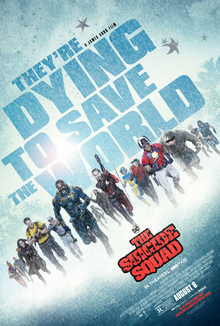 Gunn ("Guardians of The Galaxy") has put together a new Squad, still headed up by Rick Flag (Joel Kinnaman), but now with additional alpha male types in Bloodsport (Idris Elba) and the Peacemaker (John Cena). King Shark, one of Harley Quinn's sidekicks on her animated series, which returns later this year, is repackaged as a mindless brute with a limited vocabulary (voice of Sylvester Stallone). Captain Boomerang (Jai Courtney) is the only other field member, outside of Quinn & Flag, returning from the last film. And, then, there's also perpetually mean Amanda Waller (Viola Davis), who gave up her compassion at a blood drive somewhere in between movies.

I guess in King Shark's case, Gunn wanted a Groot type for this Squad. The cast also includes Peter Capaldi (ex-Doctor Who), Pete Davidson (Saturday Night Live), who was about as interesting as jock itch, and Nathan Fillion (The Rookie). A classic Justice League foe, Starro, makes his movie debut, but only talks through his mind-controlled drones. They added some extra eye candy in the daughter of an obscure Batman foe, Ratcatcher, who bonds with King Shark and the tragic Polka Dot Man, another Bat-obscurity from the Silver Age.

Gunn also cast his brother, Sean, in a dual role as Weasel (vocal effects) and another Bat-foe, Calendar Man. There are scenes before and after the credits that will set up the Peacemaker spin-off, starring the ever-busy Cena, due to drop in January.

Was this better than the first "Squad"? Yep. Gunn will try to top himself with Peacemaker (he's directing most of the episodes) and "Guardians of The Galaxy 3", but he's gotta go some to do so.