Ivermectin is this year's hydroxychloroquine. It's not really safe for humans to take vs. COVID!

A California psychiatrist suggested to Florida Governor Ron DeStupid that Ivermectin, a parasitic drug used as a deworming agent in horses & cows, could be used as a defense against COVID-19.

Dr. Mark McDonald is the man responsible for GOPer morons like DeStupid, Rand Paul, and Fox Shmooze garbage dispensers such as Tabloid Carlson and Laura Inkblot, pushing this "miracle cure" in recent weeks. The Food & Drug Administration (FDA) and the Centers for Disease Control (CDC) are advising against using it. The FDA, in fact, was very blunt about it the other day, reminding people that they're not horses nor cows.

Paul, a Senator from Kentucky, must've been sniffing the state's blue grass for the wrong reasons when he claimed that the FDA & CDC aren't taking Ivermectin seriously because of blind hatred of former president Donald Trump.

We were able to solicit advice from a known expert on Ivermectin: 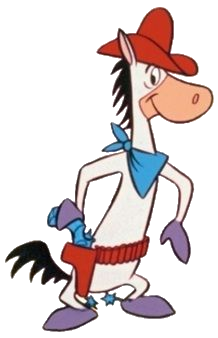 "Dooooon't you even think about it! It's not for you!"
Even America's Idiot Savant, Stephen A. Smith, weighed in when he guest hosted Jimmy Kimmel Live last week. Smith advised against Ivermectin, proving there is a brain under all that hot air.

Last year, Trump was touting hydroxychloroquine as an alleged "miracle cure". Of course, being naturally stupid, he also was blamed for people injecting themselves with Clorox bleach. It wouldn't surprise anyone if he's in support of Ivermectin.

This satanic pandemic must be stopped, no matter the cost.

If only it were that simple, but the Republicans have this warped sense of patriotism, freedom, etc., thanks to the man-child they put in office 5 years ago.

@Steven Dolce: We all want to be looking at this pandemic in the rear view mirror, but the urgency to return to a normal life doesn't justify people willingly getting diarrhea from horse paste or choking to death from a preventable virus. Just get the vaccine, you dumbasses.

I got my first vaccine on February 26, and I got my 2nd vaccine on March 26. Don't ever call me a dumbass ever again, Goldy.

@Steven Dolce: That wasn't directed at you. It was directed at the anti-vax idiots. If I insulted you, it wasn't my intnt. Apologies, my friend.

Once again, Steven; I didn't call you a dumbass. That was for the anti-vxxers out there who insist on keeping this virus alive. I was frustrated and fired up. You strike me as being quite intelligent, honestly. We're all friends here. Respect.

I got my Pfizer shots roughly in the same time frame that Steven did. It's the clueless geeks in the suburbs and the Bible Belt that listen to GOPer trash and right wing whiners like Tabloid Carlson that have to be dealt with.