Weasels of The Week: Take a guess

We noted earlier this week that Texas Governor Greg "Shakedown" Abbott had contracted COVID-19. However, Abbott, who's probably imbibed too much Texas tea (oil) to have any rational thought, refused to back down from his ban on mask mandates.

We'll address that later, but Lt. Governor Dan Patrick, not to be confused with the NBC Sports talk host, decided to be stupid and decided to scapegoat African Americans----unvaccinated, mind you----for the surge in COVID cases in the Lone Star State.

Patrick couldn't be more wrong. The vast majority of unvaccinated persons in Texas, and everywhere else, for that matter, are white GOPers. As usual, Texas government is pandering to the low information citizens in the suburbs and rural areas with lies.

The other Patrick used to do commercials for Rolaids back in the day. I'd say, if you have to attend a speech by either of these Texas twits, you might need a roll handy.

For being brazen enough to play the race card, Patrick gets a set of Weasel ears, but he ain't alone.
===============================
Back to Abbott for a moment. The ban on mask mandates has been lifted for the nonce while the judicial system in Texas deals with lawsuits brought on by parents and/or school districts unhappy with Abbott's irresponsible approach to the pandemic and refusing to let school faculty members protect students and themselves.
===============================
Meanwhile, in Washington, a number of whiny GOPers are again introducing articles of impeachment against President Biden because of the disaster that has been the troop withdraw from Afghanistan as the Taliban have reclaimed control of the country, among other excuses.
Chief among these crybabies, of course, is Empty-G (Marjorie Taylor Greene), the Georgia peach-head, who, like other GOPer idiots, is just throwing it out there because the GOPers' deposed champion, Citizen Pampers, was impeached twice in as many years. Doesn't matter that Pampers was acquitted both times. The GOPers want to play tit-for-tat with Biden. 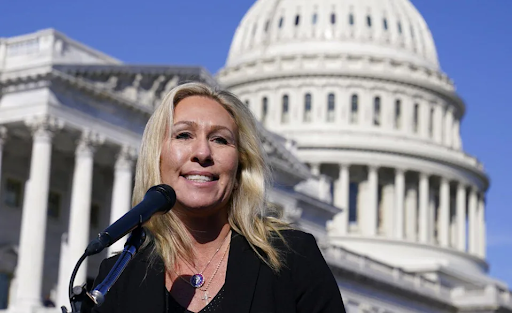 Photo courtesy Yahoo!.
These articles ain't going anywhere. It's just a bunch of whining, but has it occurred to the GOPers that the Afghanistan debacle has driven Biden's approval rating down? Not as low as Pampers, of course, but you get the idea.
Like her idol Pampers, Empty-G is doing this for attention. This is not what Andy Warhol had in mind when he said that one day, everyone would be famous for 15 minutes. Airheads like her should be neither seen nor heard.
That said, she also picks up the Weasel ears.
Posted by hobbyfan at 7:56 PM