Weasel of The Week: Dan Bauman

Before a Leon County judge rejected Florida Governor Ron DeStupid's ban on mask mandates, a chronic anti-mask clown got himself in hot water again, and, as of this writing, was still in jail.

Dan Bauman escorted his daughter to school Wednesday morning, refusing to wear a face mask. His daughter claims she can't breathe with a mask on, but hasn't elaborated, suggesting that she's had her father's poison kool-aid spoon-fed to her. We don't know if she has a legitimate medical condition. Her dad, on the other hand, is a different story. 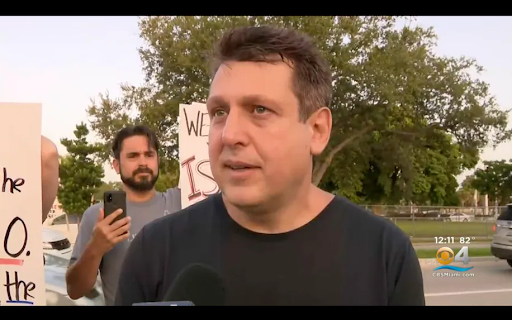 Photo courtesy of the Washington Post.
Bauman started recording with his phone. Another student, tired of his chisel-headed antics (Thanks, Chuck Miller!), reached for the phone, but Bauman decided to be a jerk and put the poor girl in a hammerlock, and shoved her into the fence. A school resource officer, who had turned his body camera on, promptly arrested Bauman.

Bauman's been arrested a few times in the last year, including raising a ruckus at a Home Depot, and using women's underwear in place of a face mask. With apologies to singer-television personality Jon Bauman (no relation---we think), Dan Bauman pulled a really Bowzer move from the darker edge of town.

That being said, Dan Bauman gets the Weasel ears this week. He and the rest of the GOPer wimps who think being masked violates their freedom need to seek therapy.

I read about this news story yesterday and I kind of feel for the daughter, who has most likely been brainwashed by her doofus of a father to believe that she's some kind of entitled princess who can demand whatever she wants and still act like a victim. She acts like she has no choice. Kid, you've got 2 choices: put on a mask or don't go to school. That kid may as well transfer to different school at this point, since she'd have real fun time fitting after seeing her jackass dad make a fool of himself on TV.

One thing that I've been wondering is where's the girl's mother? What's her take on this? I shudder to think that this unfortunate kid is being raised by King Stupid and no one else. Maybe her mom left the guy when it became apparent how pig headed he is. All in all, that's a pretty messed up family.

No mention of the mom, which suggests Bauman is probably raising his kid alone. If he's still in jail, what happens to her? She's in 10th grade.

And now that the ban's been smacked down, maybe Bauman will get a visit from Child Protective Services.