ESPN already has a couple of black corporate eyes for a couple of recent personnel moves, which, you might say, left them vulnerable to a scam.

A Sunday high school football showcase game between IMG Academy of Florida vs. Bishop Sycamore of Ohio was a disaster of epic proportions. IMG rolled, 58-0, in one of these clearly made-for-TV tomato can squashes, since a 3rd party, Paragon Marketing, helped put the game together. However, Paragon and ESPN suits were allegedly bamboozled by Bishop Sycamore, a 2nd year football program out of an online charter school that hasn't won a game yet. Bishop Sycamore claimed they had Division 1 college prospects. By the 2nd quarter, it was obvious to the ESPN announcers that they didn't. 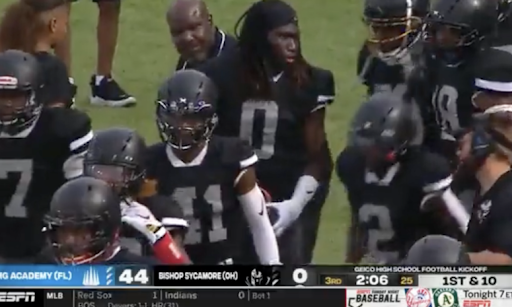 Blowouts happen all the time in high school & college football, especially in mismatches like this. This is why ye scribe tends to use a boxing term like tomato can to describe overmatched opponents like Bishop Sycamore, which wanted the exposure, but paid for it with national embarrassment.
Someone check and see if Ohio Rep. Fibber Jordan had a stake in Bishop Sycamore.
=====================================
I'm as much a Mets fan as anyone, but passed on yesterday's game vs. Washington. Pre-season football and the Little League World Series had my attention.
Tired of being booed by the fair-weather fans at Citi Field, the Mets decided to give their fans the thumbs down in Sunday's 9-4 win over the Nationals.
This attitude, displayed especially by Javier Baez, might be Baez's ticket out of town as a free agent after the season. Mets fans were happy when he arrived from the Cubs last month, but Baez has found out very quickly how fickle they are, as opposed to Chicago. Generations of artificially entitled, spoiled "fans", most of whom likely spend more time whining on WFAN when the team is losing, have made it hard for superstar players to land with the Mets, or, in other sports, the Knicks (though they're on the rise), Jets, or Giants. These so-called "fans" need to wake up & grow up yesterday.
=======================================
Speaking of the Little League World Series, this year's all-American tournament wrapped on Sunday with an all-Midwest final, as Michigan defeated Ohio to win the title. Unlike teams from Texas (Ella Bruning), New Jersey (Carson Frazier, nephew of newly retired major leaguer and former LLWS hero Todd Frazier), and South Dakota (the unhittable Gavin Weir), these two teams didn't have any standout stars. It was a fun game, though, and that's what it's all about.
========================================
If the preseason is any indication, the NFC Least will again be the punching bags of the NFL.
The four teams in the division had one win between them, belonging to defending champion Washington, and finished the preseason schedule with a collectively unsightly 1-11-1 (Philadelphia tied the Jests on Friday). Dallas, remember, played in the Hall of Fame game, and lost to Pittsburgh.
NFC predictions coming later this week.
Posted by hobbyfan at 8:02 AM