In the wake of Mike Richards' resignation as host of Jeopardy!, but not as executive producer (yet), it's back to the guest host merry-go-round.

Richards had already recorded a week of episodes, to air September 13-17. Actress-neuroscientist-author Mayim Bialik (Call me Kat, ex-The Big Bang Theory, Blossom) takes over for a 3-week run starting September 20, as Call me Kat is being held to mid-season at Fox. 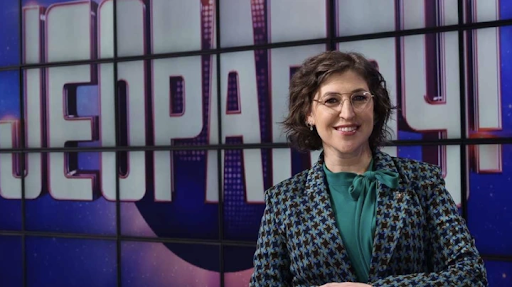 Image courtesy Sony/Yahoo!.
So what's stopping Sony from completely sacking Richards (ex-The Pyramid)? He'd only been with Jeopardy! as a producer for a couple of years, and the 7-8 year old podcast comments unearthed against him should've been enough to send him packing completely, given how others have been complete victims of "cancel culture". No one knows for sure.

What is sure is that this will lead to renewed calls for LeVar Burton (ex-Star Trek: The Next Generation, Reading Rainbow) to be brought back as well. Considering the lengthy run of Reading Rainbow, Burton has this MC thing down, it would seem. Maybe some other Big Bang alumni, including Jim Parsons and Kaley Cuoco, could be called on this time, but there are those who believe Ken Jennings, who started this merry-go-round in the first place is the frontrunner for the full-time gig.

If you've got some ideas, I'd love to read them.